Exploring the world, expanding a major

Capturing photographs in faraway lands and leading study abroad students around the globe are just part of the job for associate professor Van Kornegay. Since joining the School of Journalism and Mass Communications faculty 30 years ago, he’s done everything from documenting life in a refugee camp to working alongside students in a Malawian medical clinic. Beyond expanding the J-school’s reach worldwide, he also leads its visual communications sequence — a major that’s growing both in enrollment and in the cutting-edge skills it teaches students.

Kornegay first became interested in the emerging field of graphic design while working in public relations in the 1980s. At the time, graphics were just beginning to transition from being done by hand to being created on a computer, so the Columbia native bought one of the first Macintosh computers in 1984 and taught himself how to use it. He also decided to pursue his new interest by enrolling in the Master of Mass Communications program at USC.

“I was in the midst of the transformation from old graphics to a new way of producing visuals,” Kornegay says. “There was no such thing as Photoshop or Illustrator.”

In fact, the field was so new that the SJMC was still using typewriters in its labs, but Kornegay acquired plenty of experience through summer internships with the Associated Press in New York and with Gannett’s graphics services office in Washington, D.C. At the AP, he designed infographics, maps and charts for use in publications around the world. At Gannett, the media company that started USA Today, he had the opportunity to create graphics for the Gannett Graphics Service that supplied breaking news graphics to its member newspapers nationwide.

“At that time in the mid-'80s, USA Today was a trend setter for graphic communications,” Kornegay says. “In the print world, it was the first newspaper to do color photographs and color graphics every day on every page. That was unheard of back then.”

Upon graduation, the graphics pioneer landed a spot on the J-school’s faculty. The role allowed him to continue expanding his professional skills while also implementing what he learned into the school’s courses and curriculum.

As a professional track professor, Kornegay focuses more on creative activity as opposed to research. This has taken him to Kosovo, where he flexed his photojournalism skills by living in a refugee camp and writing stories for publication in U.S. newspapers, and French Polynesia, where he trained aspiring journalists to use computers and cameras and helped start a newspaper on the remote island of Nuku Hiva.

Travel has also become an integral part of his teaching philosophy. Each year, the associate professor leads study abroad teams to countries such as Malawi, Oman, Trinidad and Tobago, Germany and Cuba, where students experience the visual storytelling process through immersion in other cultures. In Malawi, the trip even includes a service learning component — students and faculty do things such as volunteering and providing web content for a medical clinic.

In 2004, the J-school officially launched the visual communications major and Kornegay was tapped as sequence head. The program started with just 34 students, but now totals more than 200. He attributes the expansion to the fact that the school’s course offerings are keeping pace with new changes in the industry. And, the program recently added a course that teaches students to design interfaces and online content for mobile and websites.

“We have a phrase in visual communications that viscom is permanent beta, that we are always in experimental mode,” Kornegay says. “We are also experimenting. And we’re growing.” 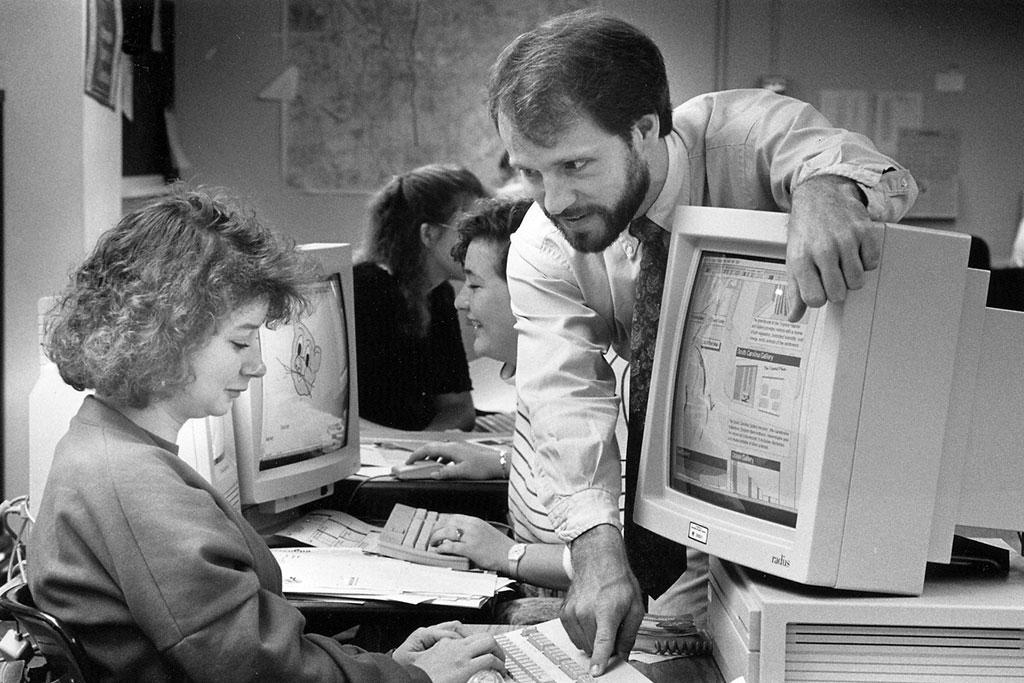 A look back through the years.